The other night, as my wife and I were spending a quiet evening reading, she handed me the latest edition of Southern Living stating that I had to take a look because  just about everybody I ever speak about is mentioned somewhere in the issue.  And sure enough, it was chock full of local talent.  So, I dove right in.  Within minutes of perusing the content, a common theme began to materialize.  A topic that is near and dear to my heart.   You can probably guess it. Yep ~ Design Matters ~ 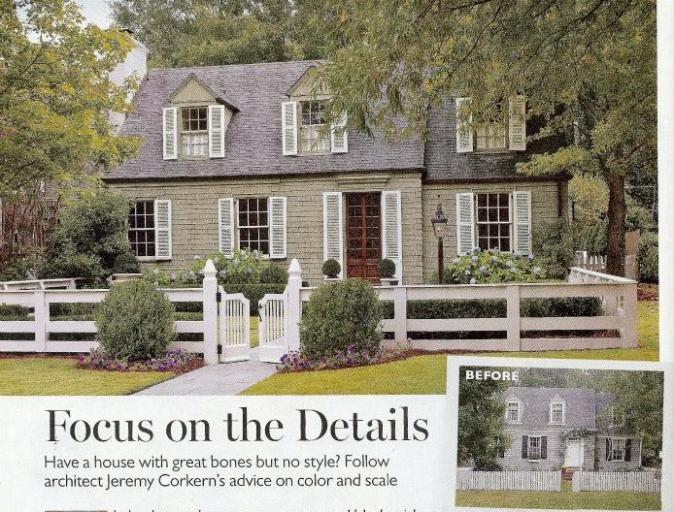 Right off the bat, they high-light a simple exterior renovation.  Check out the before and after as shown above.  But, the really cool thing here though is that the homeowner had the instinct and wisdom to seek out the highest council that he could solicit.  And who did he turn to?  It was Jeremy Corkern of Birmingham, Alabama and principle at Bates Corkern Studio.  This firm came onto my radar about six months ago and is rapidly rising to be one of my favorites.  Story after story that I hear about these guys speaks of a true genuineness that is nothing shy of admirable in todays marketplace.  Curious as to what I’m talking about?  Here’s a post from Holly at “Things That Inspire” that will further illustrate my point to the character of this organization.

Jeremy stated that what the Home needed was ” a series of exterior layers: a new paint palette, shutters, fencing and landscaping”.  However, I think that he was being a little modest here.  Sure, the new shutters have made a big difference, yet, it is in the type and placement that truly pays off Huge dividends.  First they utilized operable shutters that are hinged with tie backs, sized properly for the openings, but, the impact comes from the use of shutters at the dormers and entry door.  Other elements of significance are the use of a single light post, the bold and stately gate and fence railings and the random blue pavers on the lead walk. 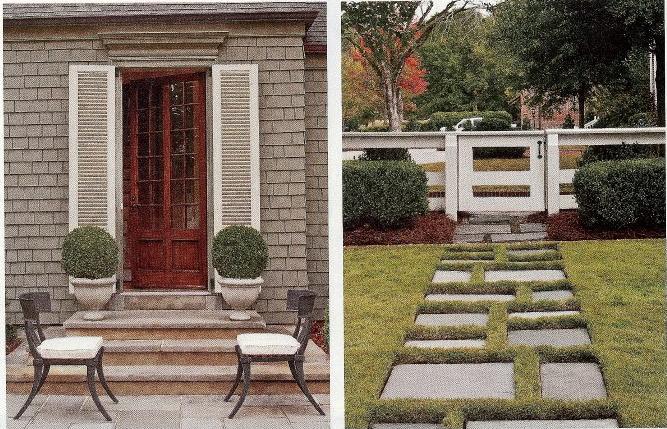 I love that entry door.  A stunning vintage piece which shines as the focal piece.  Then, there are the steps that reach out to the gardens in every direction.  And my favorite detail of all.  A stone pediment surrounded by painted shake.  It’s kind of unexpected, but, speaks to the strength of the composition.

On to another piece:

From the Portfolio of Troy Rhone Garden Design

How cool is this one.  It comes from Troy Rhone Garden Designs and I’m so glad that Southern Living chose to feature this charming little abode.  The whole property screams of integrity.  The meticulous landscape ties in seamlessly with the apron pavers and the pea gravel parking pad.  The custom fence and the stone columns anchor the site.  The foliage, the mixture of colors, the harmony and balance; they all lead to a feeling of calm because one senses that this one is here to stay.  When you consider the Home, the materials are perfect.  They have appropriately sized shutters, a true stucco masonry chimney, a blue capped porch and walk with hand chiseled stone steps and a gate to die for.

There was another story in the magazine that I was going to cover, but, could not come up with the photos to fully express my thoughts so I’ll let you look it up on your own.  Here’s a clue, it features Phoebe Howard as she tackles a Summerour home that recently came back on the market down in Sea Island.  She does such a magnificent job transforming the home into the wants of the owner that you would have thought that she had been a part of the project from the start of construction.

Anyway, the gist here is that there is no substitution for quality design.  And, that high design should never be reserved specifically for the  palatial estates.  When it comes to enhancing the  marketability one’s home this can be the key ingredient to serve as the differentiator.  In a world where we have all been trained to evaluate properties entirely on the value of return on investment, I ask you, don’t you think that these guys will get there asking price.  I would think that these Homes are so Well Composed that the owners will not only get their price, but, that the houses will sell in record time.

On second thought, I take that back ~ I don’t think that they will have any intentions of selling them at all.

Let’s hear it for the power of high caliper design.

← Topping the Charts
Spring, Spitzmiller, APC and The Grant Mansion →

2 Comments on “What’s the Thread”